The Benefits of Bans

The Benefits of Bans 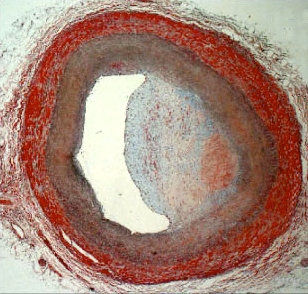 The impact of public smoking bans on diseases in communities has been much greater than most public health officials expected. In 2009, David Meyers and his colleagues John Neuberger and Jianghua He considered studies examining the association between public smoking bans and hospital admissions for heart attacks.1 The authors analyzed findings from 11 ecological studies in 10 locations in the United States, Canada, and Europe. Overall, they found that public smoking bans were associated with a 17% reduction in the risk of heart attacks (Figure 1).2 Interestingly, an even greater reduction in heart attack risk was found among younger individuals.

Canadian Findings
In 2004, Lemstra, Neudork, and Opondo (2008)3 studied the impact of a city-wide public smoking ban in Saskatoon, Saskatchewan, by examining smoking prevalence data collected for the Canadian Community Health Survey. They found that a public smoking ban in Saskatoon was associated with a reduction in smoking prevalence, from 24.1% in 2003 to 18.2% in 2005. During this period smoking prevalence in the province as a whole remained unchanged at 23.8%, suggesting that the municipal ban encouraged Saskatoon residents to quit smoking. In fact, one in four residents who did quit smoking during the intervention year attributed their decision to the smoking ban.

A recent study by Naiman, Glazier, and Moineddin (2010)4 examined the effect of public smoking bans in Toronto. The researchers evaluated the impact of smoking restrictions on admissions to hospital for heart attack, angina, and stroke, as well as for asthma, chronic obstructive pulmonary disease, pneumonia, and bronchitis. The researchers found a significant reduction in hospital admissions for cardiovascular and respiratory conditions for each of three implementation phases (Figure 2).

The greatest reduction occurred after the second phase of the public smoking ban, which included restaurants. Following the third phase of the ban a significant decrease in hospital admissions for heart attacks was observed. In contrast, the rates of hospital admissions for the control conditions (cholecystitis, bowel obstruction, and appendicitis—all selected for their expected independence from any changes in tobacco exposure) remained relatively stable over the 10-year study period (Figure 3). 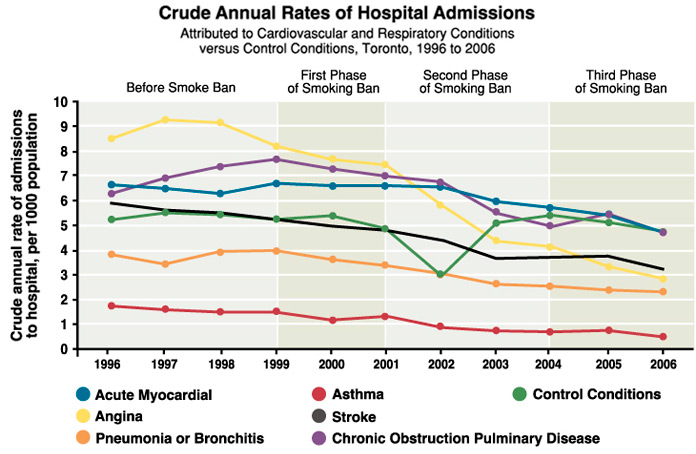 Human Impact
The Benefits of Bans

Search links between toxicants and human diseases or conditions.